The short version: I made a new Facebook page. Go like it. You know you want to. Everybody likes me.

The long version: Here are some of the ways to get involved with this site and the broader anime community.

This post is dedicated to all my readers who never say anything: feel welcome to speak up! I am friendly and don’t bite! I lurked on anime blogs for a few years so I know what it’s like, but if you have a question, correction or something to add to a post, nothing makes me and the other readers happier than having the opportunity to listen to you. There is no need to be shy!

Even if you don’t feel comfortable speaking up, I highly recommend checking out what other readers have to say in the comments, since they’re usually more insightful than my posts.

Since it isn’t entirely obvious to people who have never commented before, I just want to say a few things about the mechanics of commenting. The “name” and “email” fields are entirely optional. The “email” field in particular can only be seen by me, and I will never send you email unless you check the checkbox requesting emails about follow-up comments or future posts. Many people wonder how you get an avatar in the comments section (like my handsome starfish): you have to sign up for an avatar at Gravatar with your email address. My site then queries Gravatar with your email address and receives your avatar image to display.

If you like this site, you may also be interested in reading some other anime blogs. There are a lot of them. Here are some that I recommend. A more complete listing can be found at animenano.

The best place to talk about anime, in my experience, is on Twitter. This is the social network I use the most. I thought Twitter was a stupid idea when I first heard of it (140 characters? come on) but I’ve been converted. It’s a lot of fun to have a bunch of people on hand ready to chat with you about your hobbies any time of the day. Feel free to add me, I follow back pretty much anyone who talks about anime and doesn’t spam. If you need other people to follow, check out the other people I follow and particularly the ones I mention in my timeline. Most people on twitter are happy to talk to and meet new people, so don’t hesitate to interject yourself in the middle of a conversation.

A couple of months ago a link to my new Facebook page quietly appeared in the sidebar. My Facebook followers are sad because there are only three of them at the moment. So here’s an official announcement: go like my Facebook page. And if you weren’t aware, I also have a Google+ page. At the moment I’m only posting links to my posts, but I may expand these in the future if there’s enough interest.

I also have a tumblr. I mostly put random silly pictures like the above sexy Minami-ke gif from yesterday. Feel free to follow me there too, although I update it infrequently.

I still haven’t quite figured out how to use tumblr yet. It’s hard to predict what people will like. Pretty much nobody liked my sexy Kana gif, my AKB0048 glowstick shootoff gif, or my gif of Nibutani getting licked by a dog. I was pretty sure the last one would be really popular. Then I post this screenshot of Sakurasou: 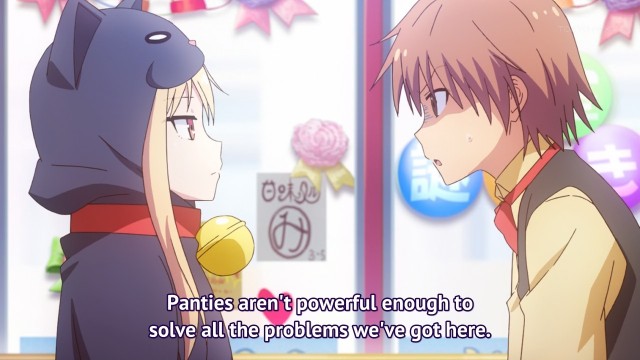 and 400 people like it. I didn’t think there were 400 people that were watching Sakurasou. Kind of tempted to use tumblr to carry out some statistical research in people’s taste.

I used to check out tumblr frequently for Animekritik’s excellent series on Quevedo’s Remedies Against any Fortune but I’ve been visiting less often since it ended. Mainly I go there when I need to get my fix for pretty pictures.

I also have a MyAnimelist (or MAL, as it’s often abbreviated). This is great for keeping track of what you’ve watched and what you haven’t, and what you liked best. You can visit other people’s profiles, and easily find out what they liked that you haven’t seen yet. This is also my #1 resource for figuring out what people’s names are when writing blog posts.

Other than that I don’t use it much though, I only remember to update it when my archnemesis (who is silly and refuses to use twitter) bugs me about it.

Want to get more involved in the anime community? Comment. Check out other blogs. Try out twitter. Facebook / Google+ / tumblr / MAL exist if you’re into them. Don’t be shy! Our community is quite open and welcoming, but you have to take the first step.

16 thoughts on “Being Social”