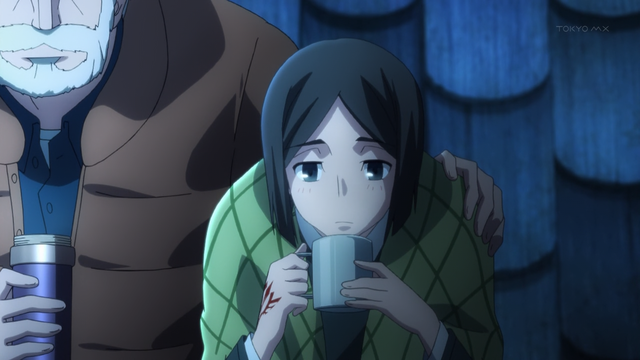 So many death flags. The only question left, is will it be just Rider, or Waver and the grandfather as well? I’m guessing Waver will die, since otherwise this story would have a happy ending from my perspective.

The scene with the grandfather was clearly a death flag, but it was still nice for Waver to be accepted despite tricking the old man and his wife. I think it could have been more powerful if they’d made more than the most cursory nod to these two old people earlier though.

We had a great scene where Waver used all of his command seals and then Rider dragged him along for the ride. These two completely trust each other. Compare this to Saber and Emiya. They’re hardly working together at all. Emiya even forgot he could ask Saber for help. Saber tells him to just use a command spell if he needs her.

In a more positive development, Irisviel died! Hooray! Unfortunately she seems to have come back from the dead as a cup. I would be okay with this, except the cup as a speaking role. Oh well. At least she’s not talking with Saber.

Administrative Note: I’m still really busy with my move. So forgive me if my posts are later and more curt than usual.