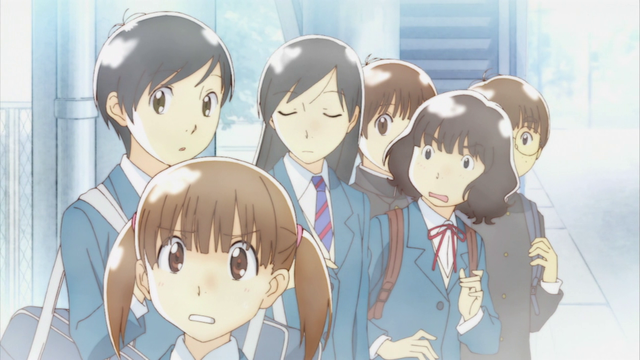 Hourou Musuko (Wandering Son) tells the story of Nittori Shuusuke as he begins the difficult transition through puberty. Shuusuke and his friend Takatsuki are both uncomfortable with their assigned gender, and prefer to adapt the mannerisms and clothing of the opposite sex. Horou Musuko explores the growth of them, their friends and their classmates.

The strongest aspect of Hourou Musuko is the cast – for a show of only eleven episodes, the number of characters is astronomical, and all of them are well-developed. The creators did an amazing job at utilizing the limited time to the fullest extent for character development. One very effective technique which I haven’t seen to such an extent anywhere else is quite simple in principle: in a scene with multiple characters, one character will say or do something, and the rest will react simultaneously. Nearly every show has scenes like this. But usually all the characters have the same reaction. This is where Hourou Musuko stands out: instead of reacting the same, the scene is set up so that the characters can, no, must, react differently based on their personalities (see the image below: count five completely different reactions). From casual interactions in scenes like this, we can, in a short amount of times, glimpse deeply into multiple characters simultaneously. This technique helped Hourou Musuko to develop such a large and strong cast in a short amount of time.

The other thing which makes the characters stand out is that they treat different people differently. This is obviously true in real life, but anime often neglect this, having characters interact with their close friends, family and complete strangers in the same way. But consider Maho, Shuusuke’s sister: she treats her brother like a creepy little brat to his face, tries to get her friends to cheer him up behind his back, acts like a fashionable teenager with her modelling friends, and is shy and demure with her boyfriend. Maho’s relationships make her feel like a real person instead of a cardboard character cutout. 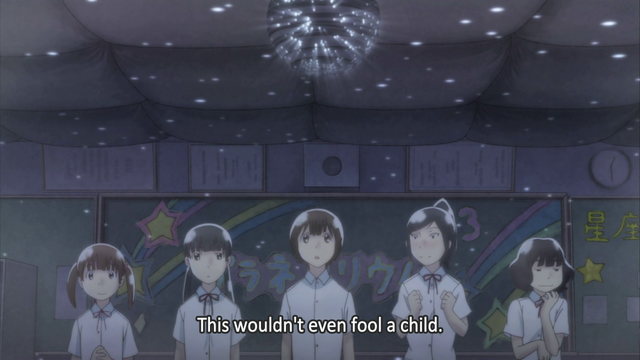 The script flows extremely well, which, for a show that jumps around between scenes and characters as much as Hourou Musuko, is quite an accomplishment. The decision to skip over the beginning of the manga turned out well, since it allowed the show to use its limited time to cover the more interesting parts. This may have the effect of leaving first-time viewers of the series a bit lost trying to figure out who all the characters are, but stick with it, you’ll figure it out in a few episodes and be grateful for the choice in the end.

14 thoughts on “Hourou Musuko Review — A”