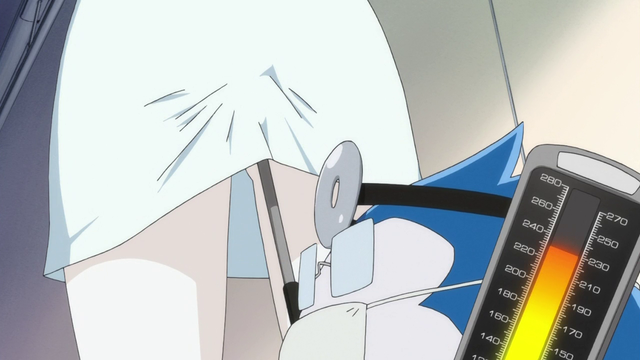 The first thing I noticed is that Kanba really does seem to love his brother (and sister). Ringo’s comment that Shouma’s family life was fake had left me wondering, but Kanba at least gives the appearance of being completely dedicated to his brother and sister. He stays all night worrying by Shouma’s bedside, even though he tries to hide it. One thing in this episode seems to jar with that image though: the actions of Kanba’s penguin. As we’ve seen, the penguin’s actions tend to reflect the thoughts and actions of their owners. And here, for most of the episode, Kanba’s penguin is busy stealing underwear, reading porn magazines, and looking up the nurses’ skirts. Perhaps all is not as it seems…

Another hint to this effect is that Kanba does not want to give the diary back, instead entrusting it to Ringo. This is probably just his cool and collected self remaining in control, but let’s leave the possibilities open.

Then we have Kanba’s conversation with Himari, which was hilarious. How dense can you be? But yeah, Kanba is a confirmed siscon now. Interestingly, Himari doesn’t seem quite so innocent towards the end of this scene, where she leans in close and pats Kanba on the head. Perhaps this is a glimpse of her true feelings, which are revealed through the penguin hat.

One thing to notice is how closely this episode paralleled the last one. Himari, and then Kanba, descend lower and lower into the floors of the building, reliving their memories on the way. The walls of Himari’s library are bars of a cage, and the walls of Kanba’s library are colored like the stripes of a prison. Both Himari and Kanba feel trapped by the past, although Himari wants to remember hers and Kanba does not.

Also, look at how what happens with Masako parallels Kanba’s conversation with Himari. Himari asks whether boys would like homemade lunches, cakes, or hand-knitted sweaters. Kanba says no, they don’t want any of that “made with love” crap, unless it’s from Himari. Then Himari leans in close, pats Kanba’s head and disappears. Masako presents the same items to Kanba: homemade bento, a wedding cake, and a hand-knitted sweater. He rejects all of them, except for the unfinished undersized sweater which he is forced to wear. Notice how Kanba tells Himari that girls always make oversized sweaters: the sweater must have been made long ago. When he arrives at his destination, Masako kisses him and disappears.

On a side note, Masako’s disappearance scene was excellent: I really thought she was going to shoot Kanba, but instead she jumped eagerly into his arms. Perhaps her Project M has the same goal as Ringo’s after all. We could also interpret this sequence as Kanba’s fall from innocence: he initially chases Masako’s fleeting image through the fields of white sheets, to the sounds of the music box. Then the music box cracks, and things start to go wrong. He enters deeper and deeper into a relationship, while continuing to feel more and more trapped. He finally ends up in the torture chamber, where he is confronted with a kiss. By the way, does anyone know what music was playing during this sequence? It seems so familiar, like it’s on the tip of my tongue, but I just can’t quite warp my head around it.

The yin-yang penguin symbol pretty much gave it away from the first episode, but there seems to be a dualistic opposition between what I’ll call the light and the dark penguins. We know that Masako’s goal is to gain control of fate, so it seems logical to guess that the goal of Himari’s hat is the opposite— to free herself from the control of fate.

Himari and Mario are paired, as we saw in the previous episode with the Child Broiler. (also, notice the まり in both of their names) I am sure we will see exactly how they are different in the future. Kanba and Masako seem to take on similar roles in both sides of the conflict, as the people who do the dirty work. Kanba is most likely Masako’s “fated” person, but Kanba only has eyes for Himari. They’ve sure done a great job of making Masako seem dangerous, with that crazy slingshot, the dark penguin sharpening the knife, the blowtorches, torture rack and injections.

Does Shouma have a counterpart on the other side? I am guessing yes— Tabuki. Note how when Ringo picked up her cellphone it gave a chirping noise, which previously rang for Tabuki. Ringo seems like the type of girl to set individual ringtones. And this also would put Shouma and Tabuki in opposition over Ringo. On that front, Shouma seems to be making some progress, as we witnessed Ringo’s guilt and appreciation for perhaps the first time. Plus, her diary is gone. Fate is now an open book.