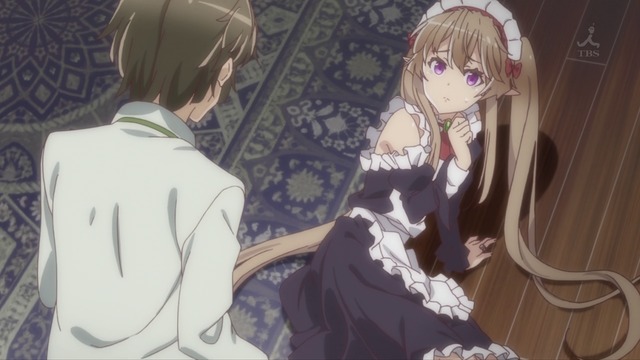 An otaku is sent to a magical world to export Japan’s manga and anime.

There’s been a string of show’s lately with similar premises where a magical world and the real world intermingle.  A few seasons ago the enjoyable and funny Hataraku-maou sama aired, in which the inhabitants of a fantasy world came to our own. Then this season, there was Yuusha ni something or other, in which hero trainees worked at a department store (it was awful, I only watched the episode). Concurrently, Outbreak Company aired, in which an otaku is brought to a fantasy world in order to drive interest in manga and anime and grow the Japanese economy.

If I’m honest, I went in expecting to hate Outbreak Company. It seemed like they had dragged up all the worst cliches in anime: servile elf maids, rebellious loli princesses, girls with tails, etc., etc. And it did have all these things. Yet despite that, Outbreak Company had heart. It used the absurdity of these traits to further the comedy by emphasizing the ridiculousness of the culture these elements originate from. For example, we had ten-year old bearded dwarves learning in school about zettai ryouki and boy’s love. Brilliant. Some other highlights include a soccer match between fans of two different anime turning into a deadly war zone, and the SDF taking down a dragon.

The comedy did turn to drama at the end (which I usually complain about) but for Outbreak Company I have no complaints, as it was the main character’s realization of his complicity to a campaign of cultural imperialism. The show didn’t arrive to much of a conclusion regarding this problem, but it was still infinitely more intelligent and thought-provoking than any ideas Maoyuu Yuusha barfed up.

4 thoughts on “Outbreak Company Review — B-”