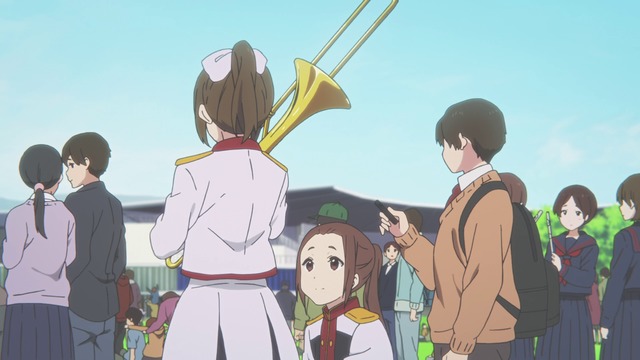 I was watching Tamako Market tonight. Lovely movie. But my immersion was completely ruined when a trombone made its appearance.

A little known fact: I am a trombone player. And a well known fact: that is not how you hold a trombone! What the fuck is that girl doing to her trombone?! Someone is going to be murdered by her slide! How could anyone even imagine doing such a thing to a beautiful trombone?!!!

Her friend isn’t much better, holding it by the bell and not even grabbing the slide. At some point she’s going to forget to lock it and the slide is going to fly right off. She’s not even resting it on the ground or her feet while she’s standing still. This isn’t rocket science, guys, you learn this the first day of playing trombone in middle school.

It’s not just Tamako Love Story either. Anime has an extensive history of abusing trombones.

Look at this screenshot from an unknown anime that I tweeted about on 12/22/2013. I don’t remember what anime this is (anyone know?), but they clearly didn’t bother to research trombones. Look at those finger positions on the slide. These people have no idea what they’re doing. The part going through the middle of the slide sleeve should be pinched with your thumb, not slung loosely between your forefinger and middle finger. Come on guys. Furthermore, the slide cover is shiny and slick, while the inner slide is gritty and looks the same as the outer part of the brass. That’s not going to work. Then note that the inner slide runs all the way to where the girl holds the trombone with her left hand. Whaaat….

Oh, and also, I wrote that during this scene, only strings were playing in the music…

Next check out this scene from Kokoro Connect. *faints* This girl should be arrested for trombone abuse!! What is she trying to do, crush the thing?!! Not to mention she’s going to give her friend who doesn’t know how to hold a saxophone a concussion whenever she turns around.

Chihayafuru also held a shocking scene with an incompetent trombonist. This one was almost more pathetic, as the girl didn’t even know how to hold the trombone properly while it was still in its case. Girl, that case comes with a handle for a reason. Trust me, it will make your life much easier.

Then there’s Persona 4. It’s much better than the previous examples, but still why would you hold it like that. But she did have more or less the correct hand positions when she played it. Even if she really sucked.

All this I found off the top of my head, with a quick search through my twitter. It’s a chronic problem that no one in the anime industry has the courage or integrity to correct. Hopefully this article will raise awareness of this serious issue so that those accountable can be brought to justice.