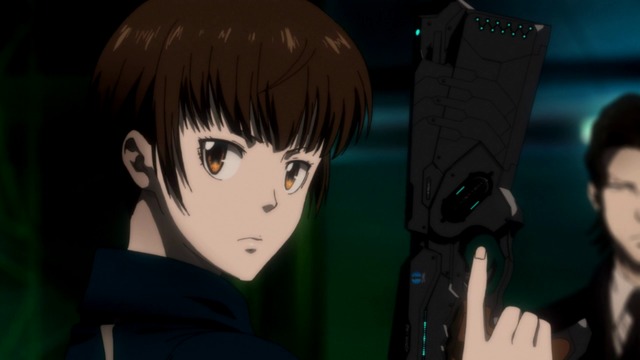 Years have passed. Now Akane is the experienced inspector who I can ship with her cute kouhais.

Yet she’s still very naive. No, not because she’s trying not to kill the criminal.

Because she’s not trying to kill the Sibyl system.

As long as you have the spirit to resist, you are a human being. But is Akane even resisting? She seems to think she is. But she’s playing by the Sibyl system’s rules. She’s still firing her gun at criminals. Just waiting until Sibyl lets her paralyze them and imprison them for life instead of killing them. She imagines she’s resisting, but the fact remains that she is one of Sibyl’s chief enforcers.

Sure, she’s doing small acts of resistance to make things a bit better. But I’m convinced that this isn’t much of a resistance because she’s still convinced that the Sibyl system is necessary and can be redeemed. Despite the terrible truth behind the system that she’s witnessed, she still thinks it can be redeemed. Akane has merely traded one form of naivety for an even grander lunacy. 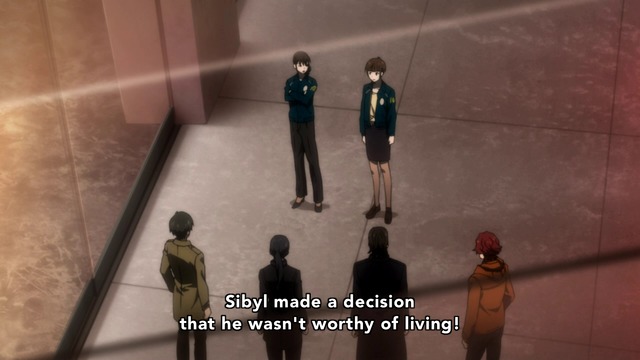 The Sibyl system can never be redeemed. Even if it decides to be “merciful” and change its mind (as Akane sees it, but it is not mercy by any human definition of the term, simply the application of an algorithm), a system that decides people aren’t worthy of living and denies human freedom is dehumanizing and monstrous by its very nature. This is the heart of the matter, all the stuff with brains in jars is just window dressing.

In fact, while Akane believes she is resisting the system and can redeem it, the system has moved on to even greater monstrosities, not taking any issue with her attempts at rebellion since she ultimately does its will completely and totally. Now it is using drugs to control people’s minds, weeding out any further possibility of resistance to its control.

In short, this is another show where I imagine I’ll be siding with the terrorists. 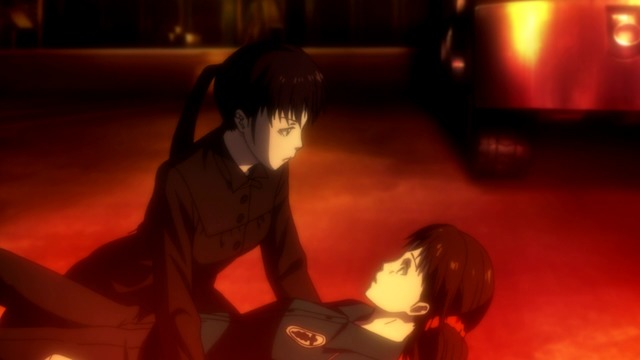 Anyway, good first episode. So many possibilities for lesbian shipping, I can’t wait.