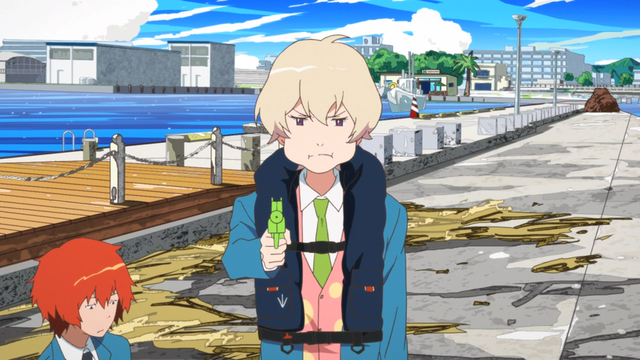 Haru, an alien, arrives from outer space and moves in with Yuki, an extremely shy boy. Haru has come to Earth to go fishing, and he needs Yuki’s help. Together, Yuki and friends work together to catch the fish and to save the world.

This was an enjoyable and solid series. The story itself isn’t anything unique: it’s your standard boy makes friend, comes out of shell and saves the world fare. It’s the way the story is told that makes Tsuritama special.

Tsuritama has this relaxing and quirky atmosphere. It’s a show about fishing, with aliens that control peoples’ minds with water guns, and a mysterious underground organization called “Duck” that researches aliens while eating curry and running around in rubber suits.  It’s quite a unique setting.

The show’s production contributes to this atmosphere significantly as well. The colorful art style grabs your attention, and I particularly enjoyed the texturing of the sea and other objects. But for me, the best part of the entire show was the background music. It was recorded by a group called Kuurecorder Quarter that plays (unsurprisingly) four recorders. It fits the mood of the work perfectly. This is, I believe, the only show I have ever considered actually listening to the soundtrack of.

Tsuritama was a great show, but unfortunately it didn’t have the special and rare touch that would make me rate it as an A rather than a high B. It’s a beautiful show, but in the end I felt that it lacked weight. The moral of the show basically boils down to “Don’t be afraid, have fun!”. There’s nothing wrong with that, per se, but it’s not all that interesting. Still, Tsuritama comes highly recommended for its quirky atmosphere. 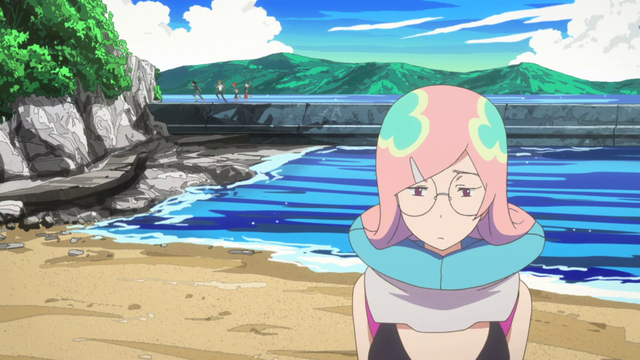 7 thoughts on “Tsuritama Review — B+”