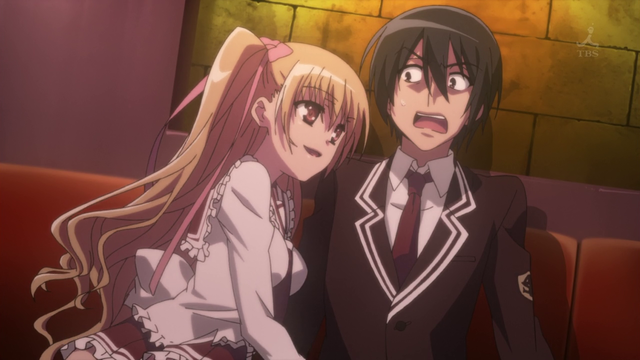 Kinji is a Butei, a student attending a school for mercenaries. On the way to school one day, he is attacked by a team of robotic Segways. He is cornered, and a transfer student, Aria, comes to his aid. She loses some of her clothes, and when Kinji is aroused, he enters Hysteria mode, where he becomes a powerful player (in every sense of the word). The rest of the show follows their adventures in their attempts to help their friends and to free Aria’s mother from prison by clearing the false charges against her.

Ok, so this is variations on Shakugan no Shana #10. The main difference from the previous versions being that, in addition to swords, Rie Kugimiya also has guns now. She’s still an annoying tsundere loli with all the other usual baggage though. In terms of annoyingness, I would loosely rank things, from least annoying to most annoying, Shana << Lotte << Louise << Aria << Rose. 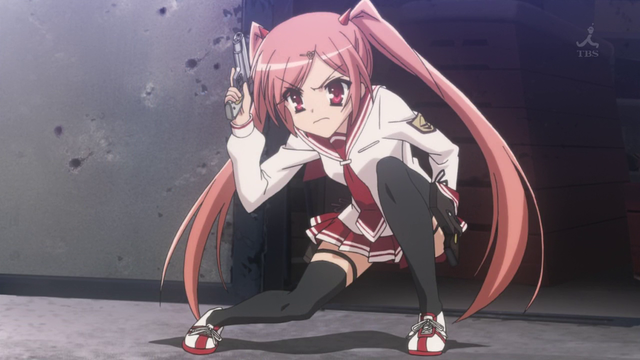 JC Staff didn’t seem to know what to do with only a single cour for Aria. The light novels clearly span much more material than can fit in a single season, and they didn’t do too well at picking and choosing parts to make a solid story. We have a bunch of characters who only show up in one or two episodes: Jeanne d’Arc, Reki and the final bad guy are all pretty much single use characters. Reki has a half episode where she tames a wolf, but aside from that her importance is nearly moot. Shirayuki gets an arc of a few episodes, but otherwise isn’t much important. And we’re introduced to Kinji’s ex-girlfriend (?) in the last episode, but she never even speaks. All in all, they failed at creating a continuous narrative.

Another issue is that the creators appear to pull a lot of crap out of their rears. Characters are made descendants of random historical figures for no apparent reason, and everyone acts as if this makes sense. The final bad guy is a teacher that has done nothing whatsoever  up to that point. Girls strip their clothes off in mid-air and their uniforms double as rocket parachutes. The final boss is a gurgling vampiric minotaur. Guns are used to precisely shoot mid-air wolves’ spines to temporarily paralyze them. And the list goes on. 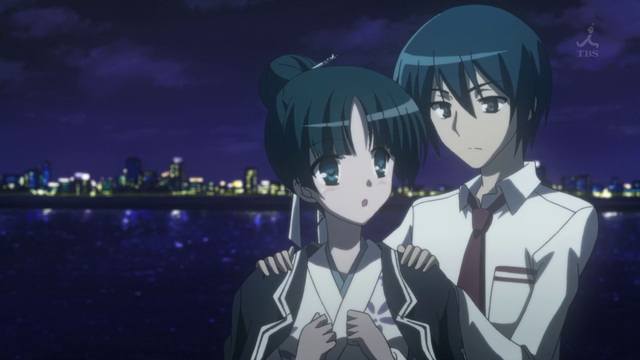 With all that said, there were some good points to the show. Mainly that, aside from Aria, the characters were likeable. Kinji, the male lead, is not your typical loser protagonist, at least when he goes into Hysteria mode. Shirayuki and Riko, two of the major side characters, are downright insane, Shirayuki in a protective / obsessive way and Riko in a more traditional way. I always love the crazy people. As far as fanservice goes, Riko is a pretty good source (except for her parachute- that’s only good in the so bad it’s funny sense), but Aria is unfortunately both a terrible and more common source of fanservice.

I would say that overall I despised Aria the character, but found the rest of Hidan no Aria decent. Unfortunately Aria is the star of the show.

Note: I’m still away on a trip, and will be back to a semi-regular schedule next Wednesday.