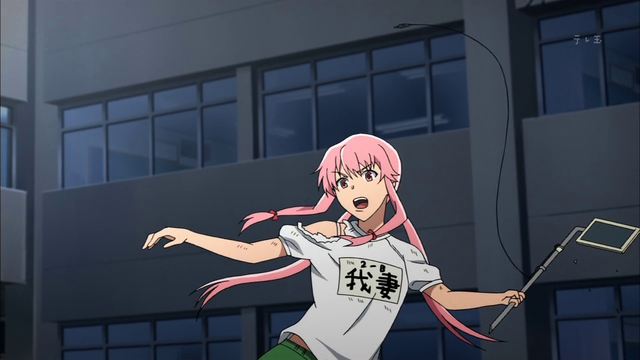 Well, that was fun. Explosions, frilly dresses and Yuno, what more could anyone ask for?

She’s one of my favorite characters from the manga (next to Yuno). For those of you wondering (warning: spoilers), she will come back, better than ever! With an eyepatch! 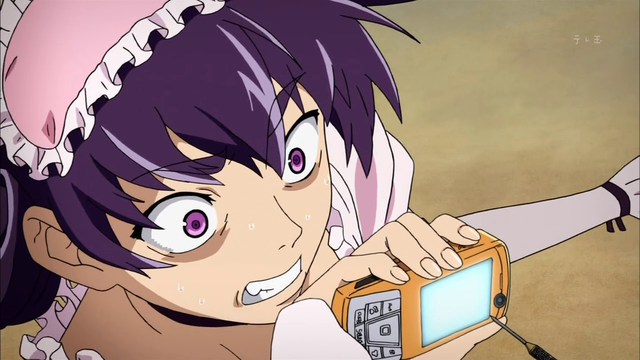 But really, we haven’t seen much of Minene yet (and it was the same way in the manga). Right now she’s just a crazy terrorist who shoots smoke bombs out of her skirt and pulls a motorcycle from hammerspace, but she becomes much more interesting as the story progresses.

Yukiteru, and Why I Don’t Hate Him

I often complain about spineless male leads and how much I hate them. So let me clarify: I don’t hate pathetic characters. What I hate is indifferent characters. For example, take the typical harem protagonist. He is surrounded by beautiful girls, but treats them all equally and has no interest in taking anything further. He lives his life just walking around town and tripping into girls’ breasts. He is a “nice guy” who just accepts things as they are. If a character himself can’t be assed to care about his own life, then why should I?

Yukiteru is different. He’s pathetic, spends all his time on his phone, and has no friends. But he isn’t indifferent. He knows exactly how pathetic he is. He hates himself more than anyone else does, and wants to change.

This episode did well at showing how Yukiteru feels about himself. He is deathly afraid: first of getting blown to smithereens, and second of his newfound stalker, Yuno, in that order. He has to rely on Yuno to survive. And you can tell from his words, shaking and eyes just how much he hates having to depend on her. But he’s desperate. He even kisses her to get her to help him (although hey, I bet he liked it).

Which brings me to another point: in what other series are the lead characters, who just met, kissing by the second episode?

The Trouble with Adaptations

The trouble with an adaptation, especially of a manga that you loved, is that you’re constantly comparing it to the original. If you thought the original version was amazing, it’s hard for a second attempt to measure up. 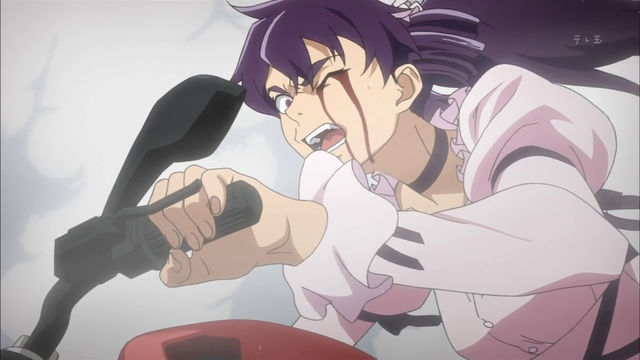 So, in line with this pattern, I enjoyed this episode, although not as much as I enjoyed the same part of the manga. Three reasons I can think of: a) I already knew what was going to happen, so there was less of a thrill, b) it’s harder to get the pacing right in an anime, since the reader of a manga can skim through the pages as fast or slow as desired, or c) the anime simply was not as well presented. I’m leaning towards a combination of (a) and (b).