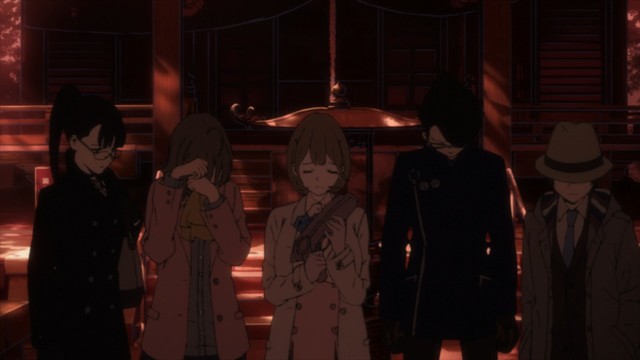 Dead people save the world.

Well, this was the best semicolon anime next to Stein’s Gate, beating out such formidable contenders as Chaos; Head and Robotics; Notes. Apparently there’s another one coming out next season too… why do they even keep trying? The more of these that come out, the more convinced I become that Stein’s; Gate was good in spite of the source material, not because of it.

Anyway, this anime. Everything moved really really fast, to the extent you could barely figure out what was going on. Everyone spoke like they were playing a game of hot potato. That’s probably why it was watchable, because I was too busy trying to figure out what was happening and didn’t have any time to think about it.

The mystery is kind of dumb, but the kind of thing you’d expect from this sort of anime. Due to the speed, a lot of it was just “what?” and I had no idea what happened or why. For example, the necrophiliac incest side story seemed pointless. The main character was annoying. The girls were cute, except for the one with boobs bigger than her head, which was kind of gross. Excellent ED, way way better than this show deserved.