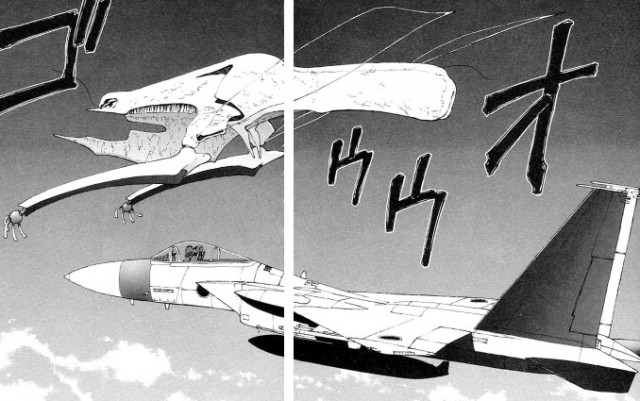 We’re initially drawn into the manga with an exciting showdown: two fighter planes face off with some bizarre monster that looks like it came straight out of a five year old’s imagination. 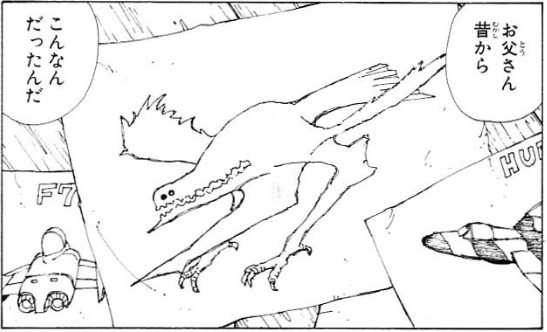 Well, turns out it did. When Shiina checks out her father’s drawings later, she sees the exact same monster. Did Shiina father see the monster and draw it on paper? Or did the monster invade reality from the realm of the imagination?

One aspect of the drawings clearly did move in the direction of imagination to reality: Shiina’s father drew all those pictures of fighter planes, and now he’s a pilot. Is the monster any different?

There’s a contrast revealed here between the mechanical airplane, a carefully controlled construct of the human intellect, and the monster, an uncontrollable, unfathomable creation of the human imagination.

Stepping back a bit, I’d like to emphasize how we begin the manga with flight. Mohiro Kitoh loves flight and he loves machinery. Another manga he’s written, Owari to Hajimari no Miles, is about all sorts of machines that fly, e.g., planes, cars, refrigerators, and battleships. He’s written another manga, Wings of Vendemiare, about mecahnical girls that— you guessed it— have wings. He loves airplanes and machines, so expect to see more of this. 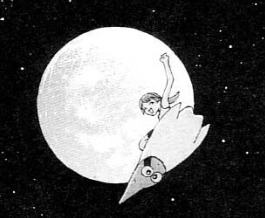 You won’t have to wait very long, since later in this chapter Shiina surfs through the stars on a (much cuter) monster of her own, Hoshimaru. Note how she dives to the bottom of the ocean to meet him, but with his power she is able to fly among the stars. I find this symbolic, if we view low / high as a hell / heaven type dichotomy. Only by descending to hell is Shiina able to reach the stars. The light shines brightest in the darkness, and the darkness has not overcome it. (But by the time Kitoh’s through, it very well may!)

Identity and the End of Identity

In a dream sequence, someone calls Shiina by name. She states that she doesn’t like that name, and asks the voice not to call her by it. Throughout this chapter, Shiina’s name is written in katakana, not in kanji as it normally would be. This is a sign that she doesn’t accept her name. We’ll get into this more when her name appears in kanji. For now, simply note that Shiina does not like her own name. 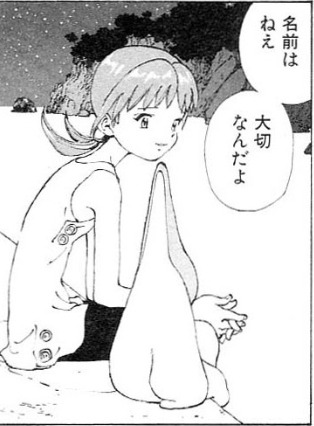 Later on, when she meets the monster from the bottom of the ocean, she names him Hoshimaru (basically meaning rounded star, a fair description). Then she says something remarkable: “Names are precious.” She values names, but dislikes her own. She doesn’t want to embrace the identity that her name represents.

A bit before this, when Shiina almost drowns and thinks she’s going to die, we gain a bit more insight into her thoughts regarding her identity.

“This world will be gone from me?
Disappear? Who?
Me? The world?
And after that?”

During this sequence, images of what I presume is Shiina and her father’s empty apartment are shown.

These are thoughts that I presume every child has.  The mind can hardly conceive of a world without itself present. Likewise, it can hardly imagine a self without the world present. If one dies, does the self die? Or is it the world that dies? Or is there even a difference? The world and her own identity are conflated in Shiina’s mind. But she does not think her name describes either. We may discover as we continue that Shiina’s name actually describes both herself and the world quite well…

A few especially nice panel layouts I want to mention, first, when Shiina discovers Hoshimaru at the bottom of the ocean:

I love the facial expressions here. A twist of the head, settling the eyes, then Hoshimaru’s deadpan stare. Shiina’s eyes open and her lips purse in surprise, then she frowns, considering what she sees. So much emotion in such a small portion of a page, without a single word. Another nice touch is how the panels descend along with Shiina towards the ocean floor.

This one’s my favorite panel though: 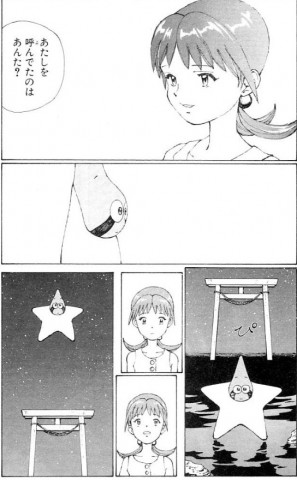 Note the symmetry of this entire page: Shiina and Hoshimaru look at each other from opposite sides of the upper panels. On the bottom, we see Hoshimaru raised from the ground to the sky, from below the torii to above it. Reflecting that symmetry, in the center, Shiina’s face rises from the ground to the sky. My earlier thoughts regarding the ascent from hell to heaven stem from this page.

Regarding the official translation: I was a bit surprised to discover they simply mirrored every page so the book would read from left to right. Makes sense though. It’s a pretty liberal translation: some of the text, particularly the pilots’ technobabble at the beginning, was completely different from the original. What they went with did sound much better in English though. My biggest complaint is that the way they gave the islanders accents made them come across as hicks. It was overdone. Fortunately we won’t be seeing these people much after this.

Shiina mentions when drawing her diary that the only canvas big enough to fit her dreams on is the entire world. Spoiler: The rest of this manga consists of these dreams being ground to pulp.

You probably noticed Shiina’s unbelievably long legs. That’s a signature part of Kitoh’s style, specific to neither Shiina nor Narutaru. 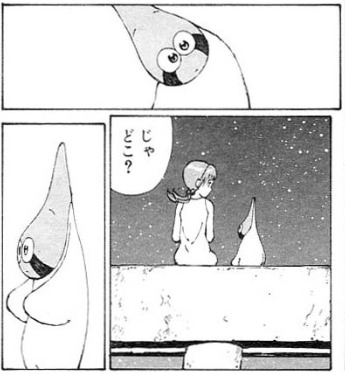 The thing I find most remarkable about Hoshimaru (aside from how adorable he is) is how much emotion Kitoh is able to convey through a completely expressionless face. The slight head tilt to indicate denial and a question. The tiny stubs of arms uplifted to show he wants to stay with Shiina. So adorable. Note how Shiina sits side by side with Hoshimaru: this aspect of their relationship will soon be differentiating her from the other characters.

10 thoughts on “Narutaru Ch. 1 — Surfing Through the Stars”