Finally a return to the Mahouka we all know and love— where the author seems to have mixed up good and evil, will always side with the oppressors over the oppressed, and loves to stomp on the faces of the oppressed with his boots while claiming he is a victim. I couldn’t contain myself and took way too many screenshots so be warned!

We begin (after some incest stuff) learning about Tatsuya’s meeting with a girl upset about the discrimination faced by weeds. You would think Tatsuya and friends would share in these sentiments— after all, Tatsuya was treated like a Weed and looked down on just a few episodes ago. But nope! Just a problem with the classification— Tatsuya is a superior person with superior genes so he doesn’t actually deserve to be treated like that.

I want to point out how delusional all these people are.

She’s “seriously biased against the Disciplinary Committee”. Why? Because last week, she witnessed a bunch of thugs beat the crap out of her club on the flimsiest of pretenses. But this isn’t a reasonable position, the disciplinary committee hasn’t done anything wrong, she is “seriously biased”.

No one even disagrees on the facts— non-magic-oriented clubs are being discriminated against. She is clearly right.

But actually, she is just a silly woman engaged in a conspiracy that seems reassuring— that the disciplinary is a bunch of evil bastards filled with too much power. That’s not a conspiracy, that’s just a fact. 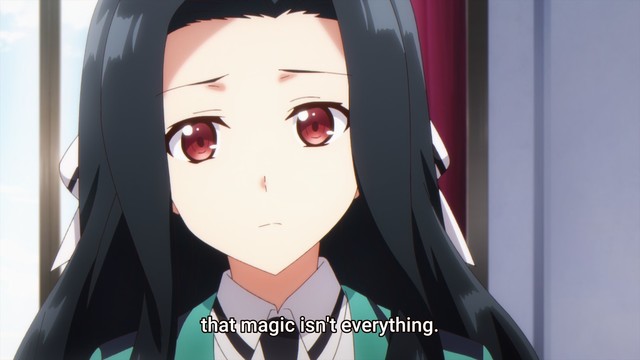 How dare they…. come together to present their grievances?!!

I… what? Maybe Tatsuya is right. Maybe the disciplinary is not discriminating against Weeds and beating up non-magic users because they’re scoring points, but because they can and they have embraced evil. Is that supposed to make it better? It’s these people who are wildly delusional!

Oh, or the silly women just can’t think for themselves and are being manipulated! You can believe us or you can believe your own two lying eyes!

We have so many of the typical totalitarian tactics— doublespeak, babel, the denial of truth, blaming outside agitators…

How dare they decry the fact that non-magicians are treated as a lower class?!!!

They deserve it!! The magicians with superior social standing deserve it because they are competent! No matter if it was just the luck of their birth.

I’m sure some people would say they don’t have to turn to terrorism. Maybe they would have a point, if this were real life. But the point is, this world was created by the Mahouka author, with the entire intention of equating people demanding justice with terrorists. Because they are one and the same in his mind.

Even taking that they did turn to violence, I’d have to say, they’re pretty justified based only on what the author has chosen to present of this world! We haven’t really met anyone who isn’t a super powerful leader of the country, or goes to the best school in the nation, or who isn’t a “terrorist”. And it still seems like this society sucks and the world would be a better place if it were destroyed and rebuilt from the ashes.

Fuck all these people. The only ethical thing to do, in the world of Mahouka, is to join the terrorists.

People who want “equality” are just jealous of the superior people. The powerful people who run the world due to the fortunate circumstances of their birth. This is literally in the plot of Mahouka with magic bloodlines and the ten great families ruling the country. And the author sees nothing wrong with this.

The non-magic-users / poors should just accept their proper placing: serving their betters from poverty. Honestly, probably the Mahouka author would be fine with slavery too.

Any attempt to make the world a better place is just their petty jealousy and their weakness.

The crazy part is, no one even disagrees on the facts! People are regarded with contempt because of the circumstances of their birth. And the author and the characters in Mahouka actively wish to live in such a world!

Magic is just a metaphor for power. That the author directly compares to financial and military power. It’s not like I am stretching here. The author wants the world to be ruled by the strong and for the powerful to keep their power and the weak to remain weak.

The goal of the terrorists is to make society collapse by demanding to be treated with respect! If the rich and powerful can’t treat the poor with contempt, the country will collapse. The worst nightmare of conservatives anywhere.

Meanwhile, the “terrorists” are concerned that the magicians are going to destroy the world. I find it hard to claim they haven’t already. I wonder if the author is digging at anti-nuclear activists and / or environmentalists here?

Meanwhile, our “heroes” dismiss the “terrorists” as crazy fanatics. Even though the plot of Mahouka only seems to prove them right.

How evil!! Rallying their comrades! Truly nefarious! Can’t wait until next episode where we beat up and torture them all to keep Japan’s moral high ground.

The terrorists have made their move! Formed a coalition seeking to abolish discrimination within the school! Some people are truly evil…

I love how this guy is calling the person demanding justice a puppet. While Tatsuya and Miyuki continue to use violence at their aunt’s bidding, who is literally one of the most powerful people in the country. And it’s the other guy who’s a puppet? It’s all projection.

Provoke unrest at a debate??? How dare they! Better beat them up, imprison and torture them to prove to them how well they’re treated!

*wild cheering as nothing changes and the status quo is maintained*

The most amazing thing to me about Mahouka is how morally unambiguous it truly is. There is clearly one side that is good, and what side that is evil. And the author, and most Mahouka fans, have so deluded themselves they can’t even tell which is which.

Oh, and in case anyone was worried, there’s still Tatsuya walking in on his sister naked, and Miyuki orgasming as she imagines her brother holding her hand.