This episode focused on developing the personality of Tomoe, the head waitress. Her parents want her to go home for a marriage interview, but she decides to stay at the inn to take care of her cute underlings.

I feared that the survival gamers were going to become a corny gimmick, but it actually turned out well and was pretty funny. Tomoe’s decision to scare away the survival gamers and get fired simultaneously was definitely not the most well thought out plan, but somehow worked out. The survival gamers’ biggest problem was a lack of an opponent, and Tomoe was more than willing to provide.

So we’ve gone through episodes about most of the characters by now, I think the only ones left who haven’t had their full time to shine are the grandmother, beanman, head chef, and the girl from the other inn. The past few episodes have been fun, but I do hope we can get back to the drama of the first few episodes soon. A visit from Ko-chan or some rivalry with the other inn would spice things up right about now…

Also, these survival games actually look like a lot of fun (well, if we ignore the stalking and peeking they actually did and consider what they’re supposed to be doing). I actually shared a campground with some of these people a few years ago, but stayed well away from them and didn’t realize what it was all about. 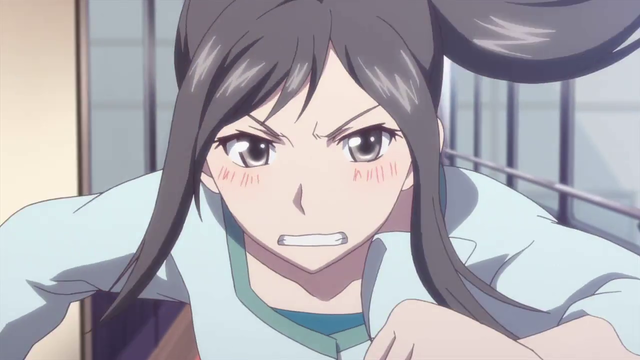