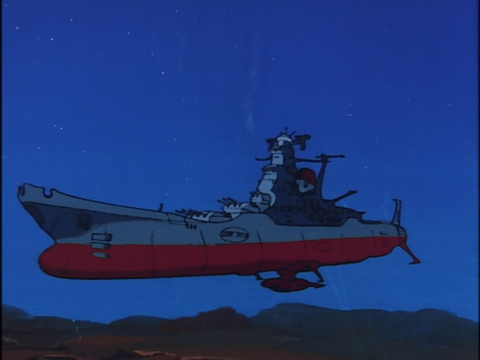 Before yesterday, I had never watched or read a single work by Leiji Matsumoto. Inspired by Animekritik‘s obsession with all things Leiji, I decided that this needed to be corrected. So far, I’ve watched the first five episodes of Space Battleship Yamato, and wanted to share my impressions.

One of the first things I noticed in Space Battleship Yamato is the amazing diversity of ships and vehicles of all kinds, lovingly crafted in intricate detail, and chock full of dials, gauges and levers. These vehicles aren’t particularly original: take the titular battleship Yamato, which is a WWII era battleship literally plucked from its graveyard and dropped into outer space. The origins of the other ships are equally apparent: we have fighters, stealth bombers, transport planes, missiles, submarines and UFOs. But with their new setting and embellishments, the ships are all entrancing. 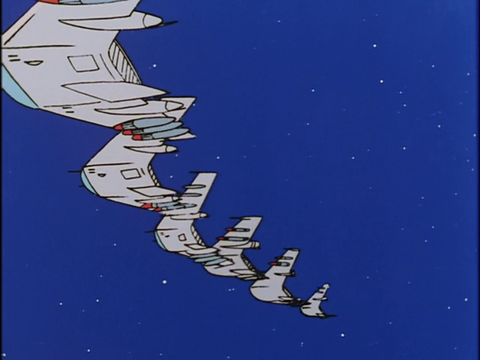 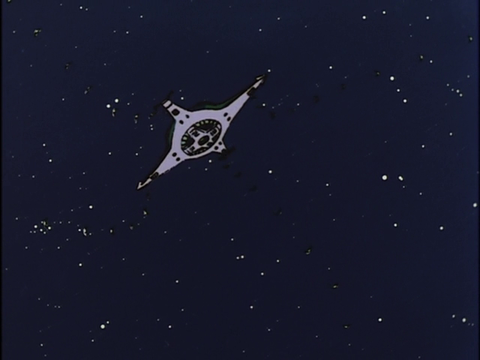 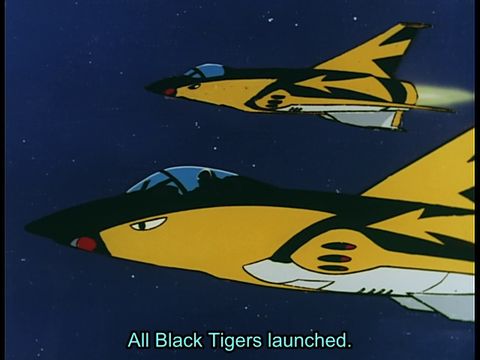 Even the non-combat vehicles are fascinating: we have cars that fly through tubes, vans, and short distance fliers which land on skis. 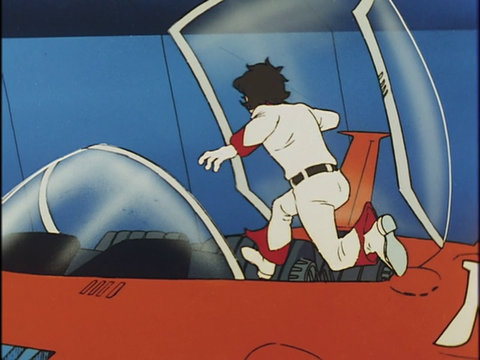 Plus, we have an awesome robot that can split into parts and is a convincing liar. 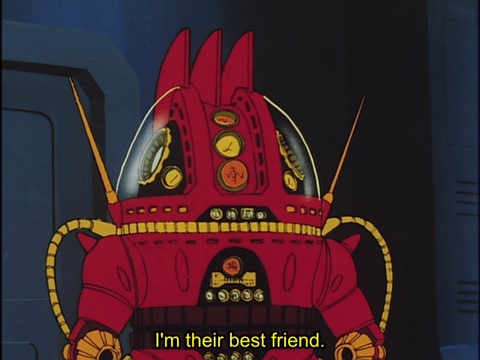 This raises an interesting question: Space Battleship Yamato was made almost 37 years ago, in 1974. And yet, the first five episodes had a more diverse assortment of vehicles than any show that’s come out in the past five years. What happened? Why are all ships the same now? Now all we seem to get are minor variations on the same Gundamesque humanoid mecha. I know some people follow mecha designs and even build models of them, but I honestly cannot see too much of a difference between different mecha.

Reminders of the Past

Despite being set in the future, Yamato conveys a strong sense of nostalgia. Part of this is that it actually was made a long time ago and the animation shows its age, but it also comes from the WWII era combat set in space. As one example, take the opening battle. It resembles an 18th century naval engagement, with the two opposing forces lining up and exchanging broadsides. It is a throwback to a day where warfare was straightforward and “honorable.”

We also have an encroaching extinction of humanity from nuclear fallout, and the titular Yamato, with part of the second episode even dedicated to telling the WWII battleship’s history. The show does seem poised to take a critical look at the sense of military pride and honor which led the Yamato to its final journey and helped pave the way to the war in the Pacific in the first place. For example, look at the farewell parade and the brother’s pointless death.

In my opinion, WWII has to be one of the most interesting eras in Japanese history. And yet it’s also the least explored in anime, perhaps due to a lingering sense of collective shame and desire to look the other way. The only recent shows I can think of that took place in this era are Senkou no Night Raid and Natsu no Arashi.

The music is great. As in, Simoun-level greatness. It fits together with the action, and the creators seem to have actually put a lot of effort into it. At the risk of sounding like a grumpy old man, anime nowadays do not seem to put much effort into the music at all, and it often ends up being some crappy J-pop. Of course, there are exceptions.

Yamato’s is a universe of intergalactic proportions. We’ve only been to three planets so far, but each of them has been fascinating in a completely unique way. We have the Earth, which has been destroyed by radiation and is left barren. Then there’s a brief stopover in Mars, which is covered with snow. We also have Jupiter, which has a floating island in the sea of methane which is home to an awesome looking alien base.

Space Battleship Yamato makes the conflict of Gurren Lagan seem petty. Humanity is going to become extinct in a year due to nuclear contamination, and the Yamato has one year to travel 148000 light years to retrieve the aptly named Cosmo Cleaner D which can save the planet. After each episode, a countdown shows how many days remain until the extinction of humanity.

So far, I’m very impressed with Space Battleship Yamato and can see what all the fuss is about. I’m looking forward to continuing watching the show, and hopefully some other works by Leiji Matsumoto as well.

3 thoughts on “Into the Leijiverse: Space Battleship Yamato First Impressions”