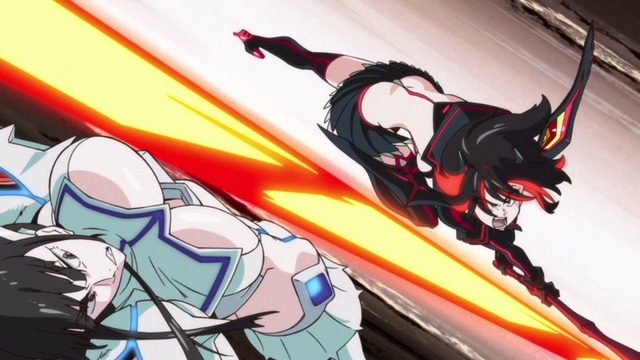 Well, what an awesome episode. Awesome fight. Awesome nakedness. I’m worried that even VALVRAVE might not be able to follow this one up.

“Pure.” Says the half-naked girl about to chop someone’s head off in a fit of rage. What does it even mean to be pure? Regardless, I don’t think the word is normally used to describe a ruthless dictator.

Crazy girl is probably right. I doubt that the president either enjoys it or feel ashamed though. For her, it is simply a means to acquire power. Also, note how Ryuuko sees herself as working together with her uniform, while the president simply dominates her uniform, much like she dominates the student body. That’s going to backfire some day.

Can’t get enough of this teacher. Kind of want to see him try this on the president. He probably wouldn’t survive though…