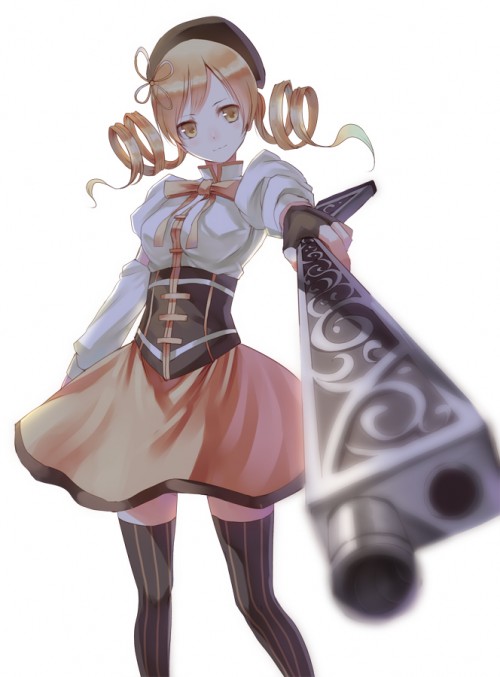 Apparently it’s a tradition among anime blogs to share your favorite moments from the past year’s anime over twelve days, from December 14th to December 25th. As everyone knows, I am a firm upholder of long-held, sacred traditions such as this. But I also believe in an even more ancient tradition, known as the “calendar.” So I’m going with a slightly different title than everyone else. But the spirit is the same. So let’s begin.

We’ll start with a rather obvious choice: Mami’s death from Madoka. END_OF_DOCUMENT_TOKEN_TO_BE_REPLACED 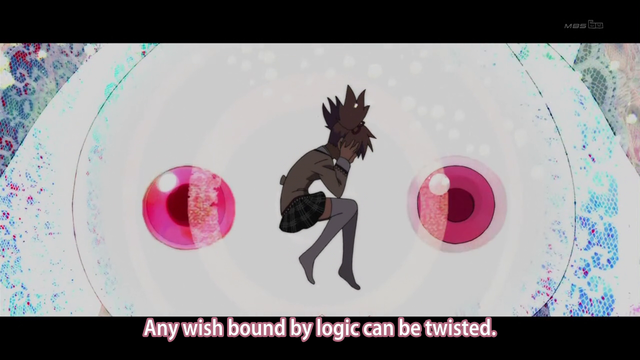 I held off for nearly a month on writing this review because I was thinking deeply about what to say. Madoka by far was the most popular show of the spring season, and with good reason. For me, the best part of the show was all the twists and turns in the plot— it really kept you coming back for more, wanting to know what would happen. Madoka was the show I looked forward to each new episode of the most since Code Geass aired. I won’t spoil any of the plot twists, but will just say that many were shocking and unexpected. Everything is wrapped up in the end, although the ending for Madoka was kind of silly. 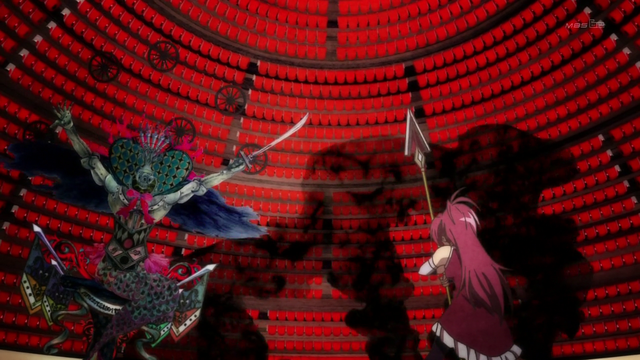 Madoka also stands out for its excellent cast of characters. The weakest is the titular Madoka, but her indecisiveness serves as the main driving force behind the show. The villain, Kyuubey, will be remembered for a long time. This is how you make a great villain – not someone who cackles evilly while destroying the world, but someone who considers what they’re doing good. Sayaka, Kyoko and Homura also turned into detailed, sympathetic characters. 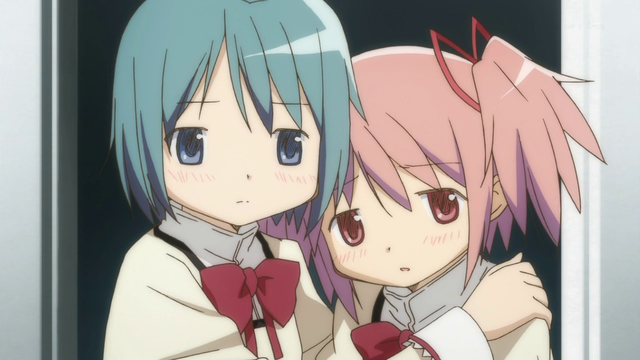 Shaft went all out on the production for this, and it shows. The battle scenes especially are spectacular. Shinbo needs to do more shows like Madoka and forget about all the crap sequels and moe shows that SHAFT has been churning out lately.

Anyway, don’t be deceived by the title— Madoka Magica is a show about magical girls, but it isn’t a show for little girls. Expect something dark and violent.

As predicted, Madoka makes a wish not bounded by logic and becomes a Godess, defeating witches before they are born so that the magical girls can live happily. It was a satisfying ending which left everything resolved, but a bit too much Shinbo. Also the Gurren-Lagannesque galactic sized battle and the Trans-Am yuri scene were not strictly necessary. 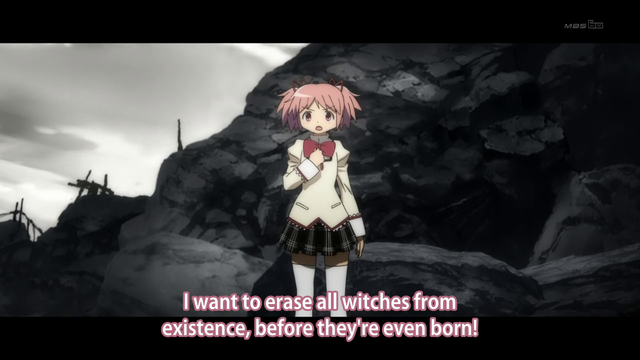 While the middle of the episode was lackluster, particularly the Trans-Am scene and extended epilogue, the beginning and the end were well done. I especially liked the twist at the end where the witches are replaced by magical beasts and Homura works together with Kyuubey to fight them. It’s nice to see that it isn’t all happily ever after. 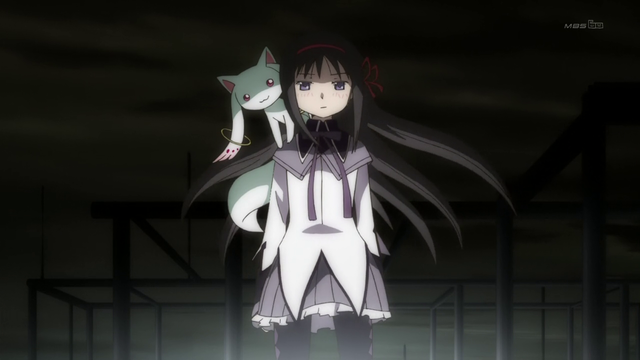 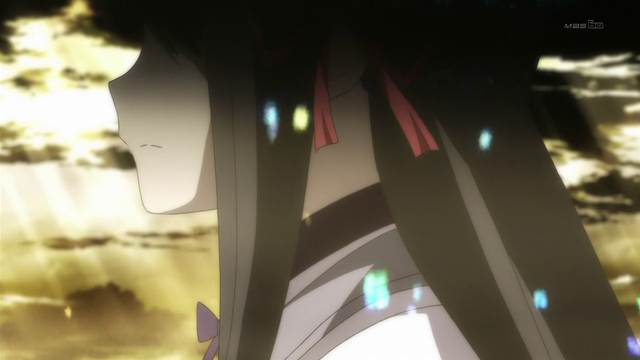 But overall, the finale was surprisingly straight forward and predictable, and lacked the twists and turns which made the earlier episodes so enjoyable, so I must say I was a bit disappointed.

Shaft made good use of the extra time they had to make the last two episodes, and it really shows. This entire episode was simply gorgeous from start to finish. Homura’s battle was especially great— although it’s unclear who wrought more carnage on the city, Homura or the witch. 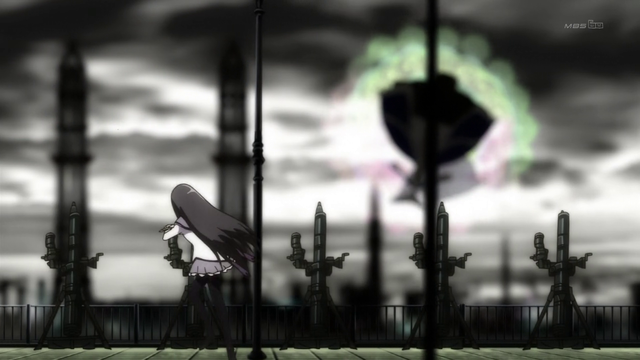 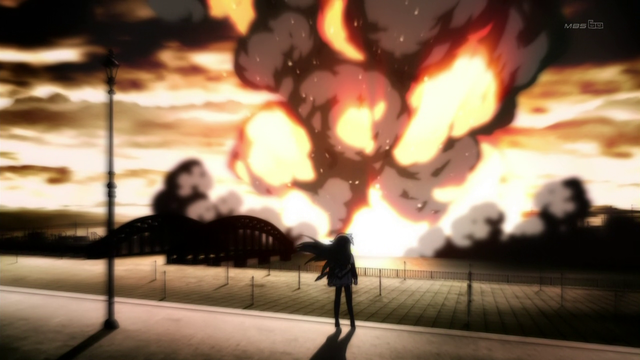 Kyuubey further explained the Incubators’ interactions with humans, spanning from prehistory to the present day, without which humans would still be living naked in caves. The humans are like cattle to the incubators, and without them would still be living naked in caves. But the Incubators treat the humans as sentient beings, and get their consent first. They link the Incubator’s interactions with Prometheus, Joan de Arc, and the Creation of man (at least that’s what I caught on my first watch through).

Perhaps the most interesting revelation from this entire conversation is that some Incubators do develop emotions, and are treated as mentally insane. Ironically, Kyuubey seems to say that the Incubators would not have problems with entropy if they themselves had emotions. It reminded me of Raymond Smullyan’s Planet Without Laughter— give it a read if you haven’t already, it’s short. Any explanation I give of the story won’t do it justice.

Homura’s Sysyphean struggle to save Madoka is further developed, as Kyuubey reveals that it is hopeless and self-defeating. But in his explanation to Madoka, he may have revealed a way to escape the fate of magical girls. “Any wish bound by logic can be twisted.” Perhaps there is a way out if Madoka can make a wish not bound by logic.

On an administrative note, I’m back from a trip and will be playing catch-up for the next few days. 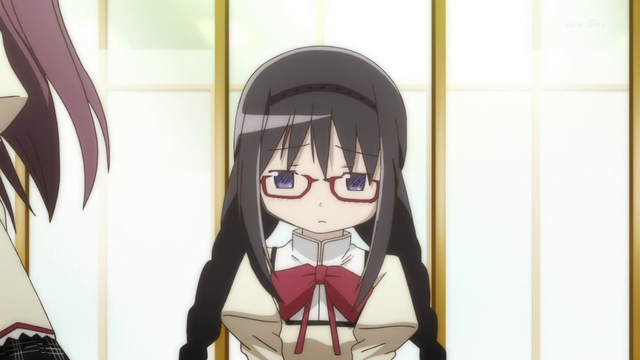 In this episode SHAFT takes a play from Higurashi’s book and looks at the possible futures Homura has gone through and her transformation from someone even less decisive than Madoka into a total badass. The contact lenses and stolen weapons helped too. It turns out that shotguns are stronger than magic wands, even if you’re a magical girl. Oh, and Madoka finally became a magical girl and Mami came back to life (each multiple times). LOLOLOLOL 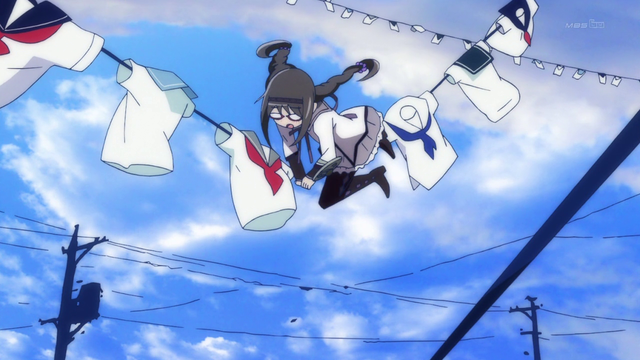 Now both Homura and Madoka have been fleshed out quite thoroughly. These were the only characters that were missing, so I’m expecting the rest of the show to head straight to the climax. Still, one question has noticeably not been answered – what did Madoka wish for all the other times she became a magical girl? Perhaps a wiser wish could lead to a brighter future, particularly now that she knows more about Kyuubey’s true nature beforehand. Such as wishing for a xenocide of all the Kyuubey aliens and the witches and the return of the souls of the magical girls. I highly doubt this will happen though, or any particularly cheerful ending for that matter. The best I would hope for is either a reset ending, given the creators’ history, or Homura dies but Madoka doesn’t. Or Madoka wishes she could stop Homura from becoming a magical girl and the universe explodes, or they become yuri time travelling pals and abandon the world to its fate. 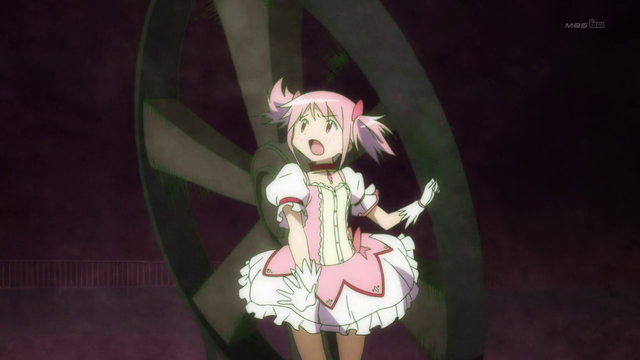 The pacing was particularly excellent this episode – by the time the episode was over I hadn’t even realized we’d passed the halfway mark. The music was integrating very well and served as a driving force. Needless to say, the animation was beautiful as well, particularly in the scenes of the Witch’s realms and the Walpurugis Night. They had more variety than usual in these scenes as well.

An aside: In case you haven’t seen it already, I highly encourage you to check out this Homu-homu Homura-chan video.