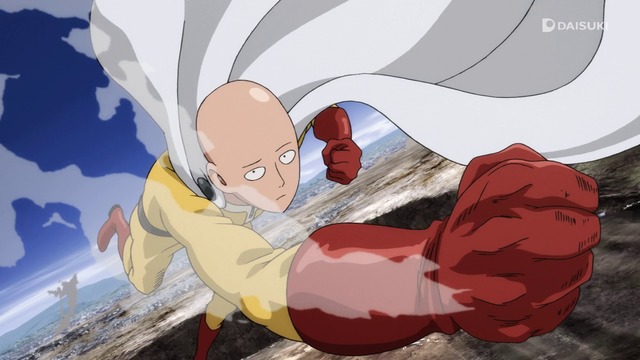 A man punches. Once.

The animation is amazing. It looks absolutely stunning. I enjoyed it on that basis alone.

I was worried that it would be repetitive, since the premise is that the main character can take anybody out with just one punch. But that ended up not being too much of a problem, with the introduction of other characters for which battling was actually tough.

Additionally, the main character’s struggles ended up being quite interesting thematically. The main character was just being a hero for fun, and didn’t care if anyone recognized him or not. But I found that I was angry at the fact that nobody except Zenos recognized him for what he’s done. This is a guy who’s saved the world many times, but gets looked down on for being weak by these people who are so much weaker than he is due to some stupid ranking system.  Yet I was upset at the supposed injustice of this, even though he didn’t care.

It also had a good deal of moments that were pretty hilarious.

I can only assume this will be getting a sequel, and I for one can’t wait.