Wonder if they realize acception isn’t a word?

We start out with Bizon raping Hina again by drugging her up. Of course Aoba and Dio aren’t allowed to Buddy so they wait an entire five seconds into the battle before Buddying. The scientists use all their analytical powers to detect that there’s something constrained about the enemy’s coupling. That’s right. It’s non-consensual! Only a horrible abuse of technology would allow such a thing. What kind of self-respecting scientist would create technology to kill millions of people, without ensuring that the soldiers consented to the partners they work with?!! And no, silence is not consent.

Upon realizing this, Aoba goes and asks Hina to couple with him instead. Upon seeing his wavy hair when he takes his helmet off, Hina immediately consents. Easy choice. Aoba’s hot. 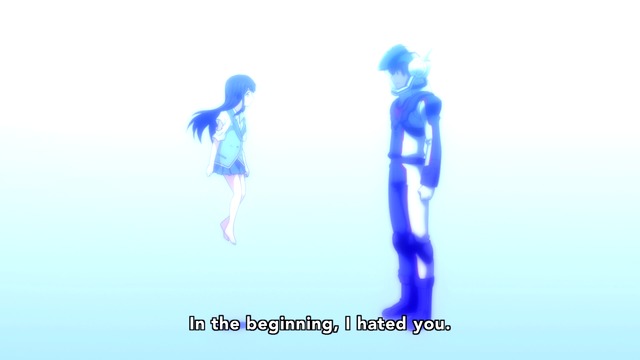 Their Coupling is so great that it creates a wormhole through time. Hina feels like she is a five year old girl again. Aoba likes it that way. Hina goes into the wormhole to rescue the Aoba of the past. Aoba realizes from Trans-AMing that Hina has been traveling the same cycle through time for millenia… or something. (This time travel thing was so dumb that I don’t want to even attempt to think about it, I will just get stupider.)

Aoba and Dio BUDDYCUM™ together into the wormhole to defeat Bizon and rescue Hina.

A masked man in a wheelchair appears.

See you next season! (or not)

This show is entertaining, but sometimes when watching it I wish I didn’t think either.