This was one of the better portrayals of the US that I’ve seen.

They even got the customs at the airport right. Speaking of which, that customs agent is awesome. Dual mad scientist laugh!

Okabe keeps getting carted off by the police, too, which is pretty hilarious. Although it’s not clear to me why they didn’t put a bit more effort into the fonts on the police officer’s shirts… they looks hideous.

The episode even featured the ubiquitous shitty American motel! If anything, it was unrealistically clean inside. I like the “American Owned and Operated” sign too. I guess Japanese people must hear about all the “buy American” campaigns, but generally it’s not something most people think about when staying in a motel in America. I’m pretty sure that the American motel that isn’t American operated is extremely rare, at least.

Okabe has the right idea though. American pop culture has succeeded in passing along an important message to our Japanese friends: avoid roadside motels if at all possible. A personal story: one time I was forced to stay in one of these places. I went and got the key from the guy sleeping at the front desk. Put it in the lock, turned gently, and the key literally snapped in half. Went back and showed it to the guy at the desk, he wasn’t even surprised and wordlessly handed me a copy.

America is, of course, the Holy Land of Dr. Pepper. (The headquarters are in Waco, which is where Okabe should have taken his pilgrimage to. They have a museum there.) 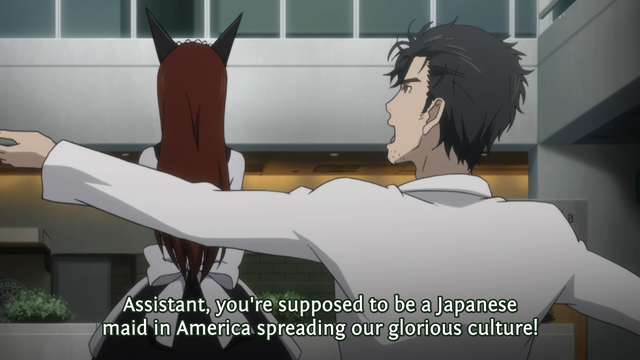 Of course, cultural exchange is a two way street.

All in all, though, the setting did feel like America. It was one of the best portrayals I’ve seen.

The biggest thing they got wrong is the food. What the hell is this supposed to be?! If presented with this, most Americans wouldn’t even realize it was intended to be edible.

The biggest thing I noticed that they got right about America, though, is the sense of distance. Twenty-six Japans could fit inside America. When they talk about remote villages in Japan, I can’t help but laugh to myself. Consider Shiki or Higurashi. The villages there are supposed to be remote, and completely inaccessible. But the kids there can hop on a bus to spend the afternoon shopping in a neighboring city. That isn’t remote at all!

You can drive through west Texas for hours without passing a town with population greater than fifty. We estimate the size of a town by whether it has two, one or zero stop lights. Any place that has public transportation does not qualify as remote.

So I was pleased when they addressed this by having Okarin get stranded. That’s what happens when you have a taxi drop you off in the middle of nowhere (although honestly, he shouldn’t have been able to get so far from LA in such a short time… but whatever). And don’t worry about your cellphone running out of batteries. You’re lucky if you would have had service anyway. (although in the past few years, it has gotten much better)

And I liked how Okarin suffered from heat exhaustion too. It seems from anime like they always have nice weather in Japan…