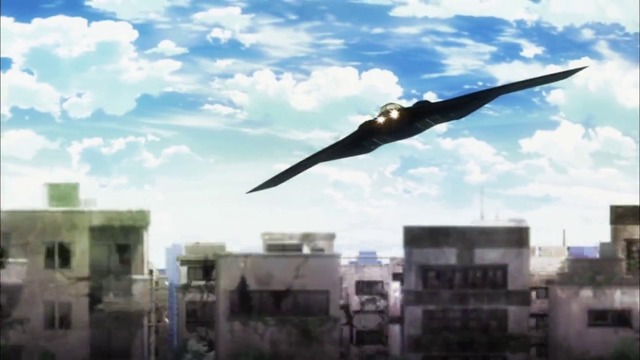 Coppelion — First they mistake a stealth bomber for a crow. It attacks them with a machine gun mounted to its nose. Then they catch up to the stealth bomber in a Jeep. Then they shoot it down with a rocket launcher. Because the bottom is its weak point. Then they are worried that it will crash land in a tiny pond, which will douse the fire, allowing it to immediately take off and escape again. When it has a giant hole in it and has just crashed. Oh, and by the way, these girls who mistook a stealth bomber for a crow are professional soldiers. I… I like Valvrave, and this is too stupid for me. Dropped.

Tokyo Ravens — They seemed to have toned down the stupidity from the first episode. I’m still watching it, but it hasn’t kept my interest much. Especially with the tearjerker about the girl’s brother. I feel like I’ve seen that story before, many, many times.

Gingitsune — The new guy annoys me.

Outbreak Company — The comedy here is pretty good. What he’s teaching them at school is hilarious. The new furry character seems useless at the moment but I’ll withhold judgement for the time being.

White Album 2 — Is anyone not shipping Touma? This love triangle is way too one sided. Just like True Tears where Noe is the one and only possible choice. The other girl (forget her name) might as well have never existed.

Log Horizon — I don’t know what it is about this show. Yes, I realize there isn’t much of a conflict. But I’m enjoying it nonetheless. First of all I think it does a much better job at capturing the feel of an MMO than other shows— even though they’re trapped in the game world, no one has any delusions that playing the game is the be all / end all of existence. In fact, now that they’re stuck there, most of the people don’t seem to give a crap about the game. The other thing is that the characters are adults, and it shows. They are much more mature than your typical anime characters. At this point of my life I can relate to them much better than the umpteenth show about teenagers.

Update: I’m going to quote Drasca’s comment from last week, who explains his enjoyment much better than I’ve been able to:

Log Horizon to me feels like slice of MMO life with rather than standard school setting so far in terms of pacing and drama. There’s no impending doom, and the agency for plot is not really there. There’s slow build-up and discovery of the world, yet mostly it is about things you’d see in a MMO and social interaction / perspective there. If anything, there should be more bumblers, but there’s not enough screentime for that.

I’m fine with LH as it is thus far, as it hits my geeky soft spots for recognizing such little details. I see potential slow buildup in the horizon, but I am enjoying the slow pace and reveal of powers and people. I am assuming there’s many more characters yet to be revealed completely. I stopped the video to count how many were in the “Tea Party”, and noticed the cat-knight was there as well as our Guardian and Enchanter main characters. There’s enough room to do more without revealing impending doom from the get-go and never really reaching there because there’s always hurdles in the way. Let the challenges surprise me as they come. Log isn’t about high drama / crime mystery, but more how to say, social & world exploration based? Some people need the ‘big bad boss’ on the horizon on their minds. For me, that’s already been done. I’ve seen all those bosses, slain them or watched shows about the pitfalls of the imperfect pursuit of slaying them. I’m perfectly OK with just existing and taking the world step by step with light-hearted and self-aware / deprecating characters.

The reaction of our main characters finding out our girl was college age was golden. Like you said, very refreshing we have actual adults. I hope I’m using the following words right: the show is more seinen than shounen, more mature than assuming the viewer knows nothing. I’m liking it for those reasons. Maybe it just hits my geek buttons and comfortable MMO nostalgia chair while glossing over the distasteful bits, but that is enough for me.