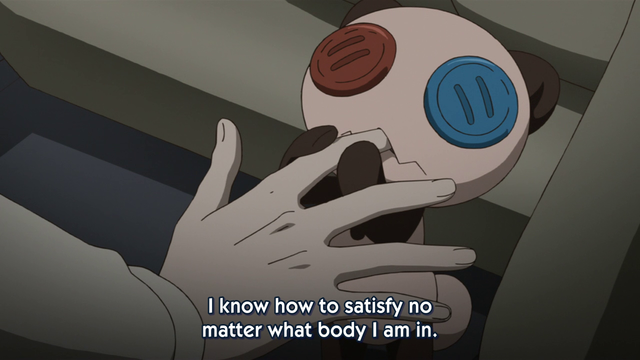 A great episode. This show keeps getting better and better. Although I did feel parts of it were a bit fast.

As I mentioned before when writing about No. 6, a faceless boogeyman is a cop-out. It is a concept that is at fault and bears the blame, not the people that choose to implement that concept (or choose to look the other way). Government is a human institution, formed and maintained by individuals. To condemn the government is to condemn humanity, or a portion thereof. Defacing the villains serves to absolve the society’s members of their complicity and guilt.

UN-GO, thankfully, avoids this. The government isn’t one monolithic entity. It’s composed of competing factions, with different goals, which often come into conflict. It is a decidedly human institution. This simultaneously serves to make the organization both more believable and more fascinating.

I didn’t expect this show to have any fighting, but color me impressed. The short action segments were tense, exciting and solid. First we have the chase by the Public Security Force. There’s a panic as the people evacuate the tent city. Inga defeats them with his powers. I didn’t know he had other powers as well.

But the part I really liked was when they got to the house. The Public Security Force, when their ruse is uncovered, pulls their guns on the detective and doctor. Kaishou’s daughter blocks the way, but they shoot anyway. Nice save, Mr. Detective. The doctor is shot, but is revealed to be a robot and goes on a rampage. Then Izumi makes the save. Inga’s right. She was pretty cool here. She is way cooler than Saber in a suit. Although she looks even cooler with her cape. I demand more capes.

I’m not trying to imply that what he did was right. But it seems to me that it certainly wasn’t for lack of trying to do what’s right: perhaps it was an excessive love of what’s right. Let’s compare with Kaishou: he also hides the truth for the sake of the “greater good.” Is what he does wrong? Sure. But does he do it for lack of a sense of justice? Not at all. I’m certain that he does it because of his sense of justice. His idea of righteousness simply values the welfare of the entire society over fairness to individuals. 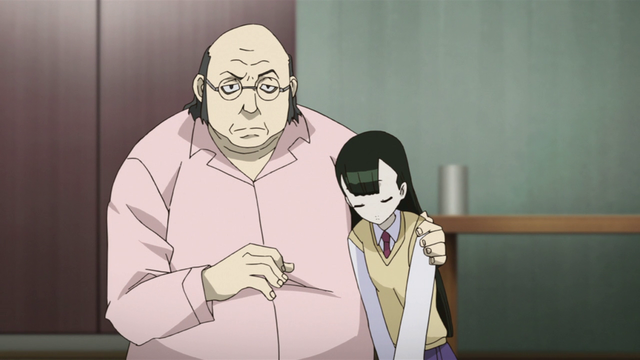 Really, the reason we know that the scientist is evil is because he’s fat. As everyone knows, all fat people have no self-control. This is why they need to sexually abuse robots to find fulfillment. Hence, they have no sense of justice.