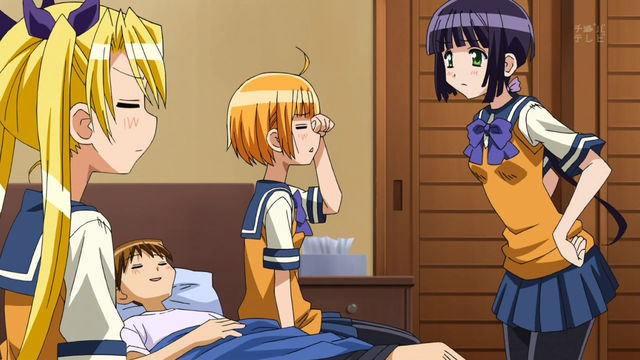 Onii-chan no Koto… shows the life of Shuusuke and his harem of three girls: his (adopted) sister Nao, his childhood friend and freakish stalker Iroha, and class president / closet BL-lover Kondou. The show got off to a strong start in the first few episodes, but managed to lose most of its momentum in the middle by repeating the same jokes over and over again. It was funny the first time Iroha spied on Shuusuke through her telescope and they formed a chain of five people stalking each other. It was less funny six episodes later when Nao and Iroha had done nothing the entire time except follow Shuusuke from the shadows.

The characters could have been interesting, and were when they were first introduced, but quickly lost steam when the creators had them do the same jokes over and over. Nao especially is a fun character to watch as she plots ways to seduce her unwitting brother and loves him for how disgusting and pathetic he is: but in the second half of the series she was basically relegated to a background stalker. Nao’s two friends make an excellent counterweight to her obsessiveness, but they disappeared about halfway through the series. Iroha was amusing for the first episode… but again, after ten episodes of doing nothing but stalking, it can get a bit stale. Her unexplained unholy alliance with Nao throughout the middle of the series didn’t help, as one of the more amusing aspects of her character was giving Nao someone to fight with. Kondou was entertaining when she was having Shuusuke buy her BL books, but after she discovered Shuusuke’s nipples the creators pushed her into the background as well. So all in all, the characters were interesting but poorly utilized.